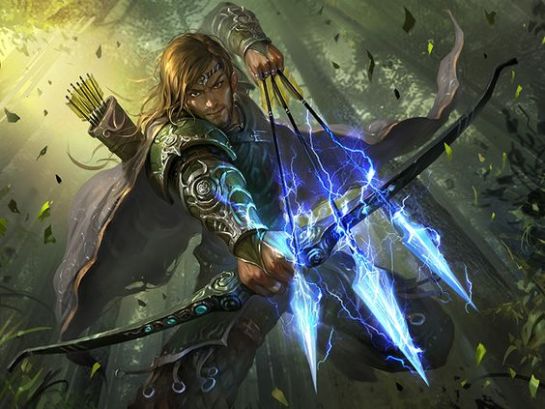 Archery features heavily in the fantasy genre. In fact, I cannot recall a fantasy story that didn’t feature a bow or arrow. It’s one of the reasons why I love the genre so much. But I’ve learned the hard way (always the hard way isn’t it?), that research is necessary when it comes to such technical aspects. Not only will you look like a genius for knowing crazy facts about bows and arrows, but you’ll have a tale enriched with details that readers will love.

To help you out, I’ve done a bit of that research, and below you’ll find a nifty guide to all things archery, packed with details for you to use in your own fantasy short stories and fantasy novels.

What is an arrow? 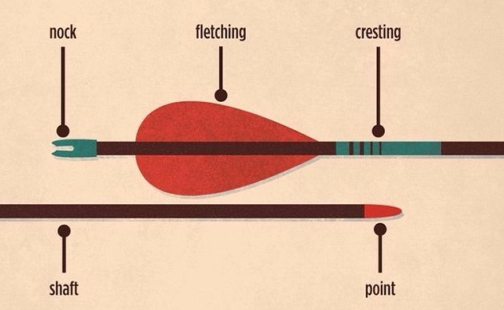 The anatomy of an arrow

The nock is to hold the arrow to the bowstring.

The shaft is sharpened into a point, or an arrowhead attached to the end. Early arrowheads were made from bone, stone or horn, with metal arrowheads like bronze and iron, developed later. 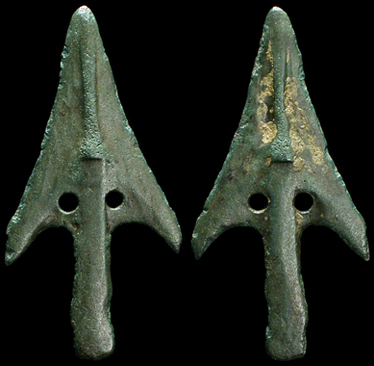 There were various ways of affixing the head to the shaft (I can hear your dirty minds working). An early method was using a glue-type resin made from plants. Another was a process known as hafting, which involved softening the shaft with heat or water so that slits could be cut in its heart. The arrowhead, carved in a suitable way, was then fitted into the holes. Another process was split-shafting. This involved splitting the end of the shaft lengthwise, inserting the arrowhead, and securing it using sinew or rope. 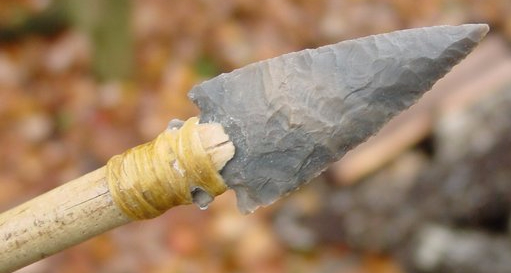 Some lazy bastards just spat on the end and shoved it onto the shaft right before they loosed, enough for the head to stay on the shaft and lodge in the body of an enemy.

The feathers used in medieval fletching came from goose, turkey, duck, grouse, pheasant, even pigeons. Goose, however, was deemed the best. This type of feather possesses oils which make it waterproof, to a certain extent. The size of the feather depended on the purpose of the arrow.

Arrows decelerate quickly once loosed, and the velocity of an arrow was important in penetrating metal armour. Here’s a brief distance/damage guide to give you an idea:

A depiction of the Battle of Crécy

Arrows were stored in quivers made from oiled canvas to keep them dry.

The only way to cleanly remove an arrowhead was to push it through the victim’s wound and out the other side. (I’m swallowing vomit here). If bone stood in the way, then depending on how good your doc was, it was pulled free with forceps.

If you’re enjoying this post about archery in fantasy, why not stay in touch? Everyone who joins my mailing list receives a bunch of tools for writers, including lists of publishers and book reviewers, the first chapter of my novel, Pariah’s Lament, and also a free 150-page eBook on the craft of writing. Simply fill out the form below!

The short bow emerged first, but, as the name suggests, it had limited range, and as a result, limited effectiveness in battle. The longbow changed archery and warfare forever. 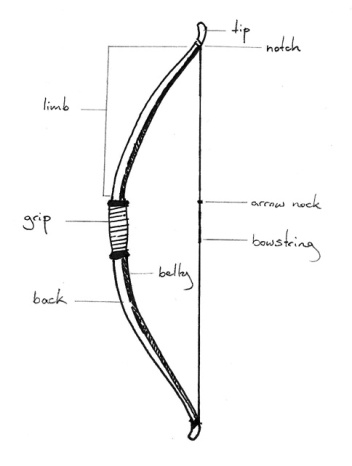 Anatomy of a bow

Most longbows were made from a curved stave of, amongst others, yew, ash, hazel, maple, and elm. Yew was deemed the best because it can withstand a great deal of tension. The strings tended to be made from hemp (taken from the world’s favourite plant) because it’s strong, easy to manufacture and inelastic.

The longbow was somewhere between five and six feet tall and tended to match the height of the wielder to allow for a full draw. Like arrows, a bow was kept in an oiled canvas bag to keep it dry.

The shape of the bow was very important. There were a few different shapes, the main being: 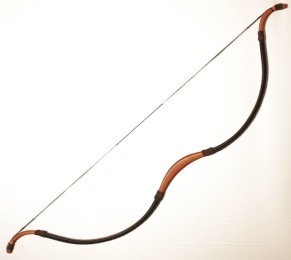 The recurve: a bow in which the tips curve away from the wielder. As the bow is drawn these curves straighten, and when loosed, snap back to propel the arrow at a greater velocity. To achieve the shape the tips were boiled in water.

Self-bow: a simple bow made from a single piece of wood with the tips pointing away from the wielder.

How do you shoot a bow?

Mastery of the bow required a great deal of practice. Training involved lining up and aiming at markers set at various distances and gradients. A key skill was reading the landscape to note any dips, rises or obstructions. The objective was to create a killing zone, rather than aiming for specific targets.

The act of notching the arrow to the bowstring is known as ‘nocking’, and with this, speed was everything—definitely not like me, fiddling for minutes just to get the arrow on the string, all the while swearing profusely. The arrow is then ‘drawn’ back, the string tightened. To keep it taut an archer had to be physically strong, with power generated from the muscles of the back. ‘Loose’ was the order to shoot. “Nock, draw, loose.”

So speed was important, and to accelerate the process in battle, arrows were stabbed into the ground before the archer.

Archers had to be mobile too. If shit hit the fan they had to move and adapt. Heavy armour was spared, with the emphasis on lightness and portability. If archers did get caught up in close combat most were armed with a blade of some kind, a popular one being a falchion—a one-handed, single-edged sword, similar to a machete, but with a crossguard. 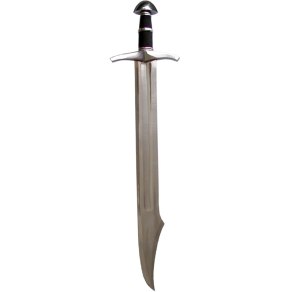 Mounted archers became popular during the Iron Age, with the earliest depictions coming from the Parthians of Iran. If you thought shooting an arrow while standing still was tricky, how about firing one from a charging horse. 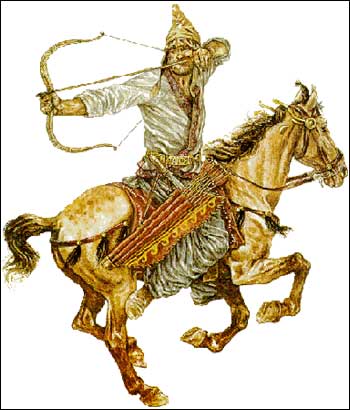 Mounted archers provided a massive tactical advantage, able to harass the flanks of foes, cause disruption and confusion, and inflict casualties. The Parthian shot, as it was known, was a tactic which involved retreating from an enemy while turning the upper body and shooting backwards. Mounted archers were, however, pretty weak against a large force of foot archers, who had a much swifter rate of loosing, as well as a bigger target to aim for.

Here’s a terrific video about the life of a medieval archer, courtesy of Modern History TV.

My own experience of archery

A good pal of mine called Ciaron took me shooting for the first time not long ago. Ciaron’s a whizz at archery, and even made an appearance for Team GB once, so I was in good hands. Before my little shooting workshop, I’d studied archery a great deal for writing purposes, but nothing beat the actual experience of holding a bow and loosing an arrow. It taught me a few new details which I’ve since used in my debut novel, Pariah’s Lament. One of the protagonists, Isyara, joins a company of women archers known as the Darts of Pleasure, so I felt like I had to know more in order to write these scenes compellingly. Here are a few unique insights I gleaned:

Compared to the traditional bow, the crossbow was cumbersome. It was, however, easier to shoot and packed a hell of a punch. From close range, armour may well have been made from butter.

The anatomy of a crossbow

Some medieval crossbows were crafted with horn and sinew, as well as wood. Horn can take great strain, and sinew, such as that of the neck tendon of an ox, becomes stringy when hammered.

The biggest downside to the crossbow was the length of time it took to reload. With some of the earliest crossbows, the user had to sit down and pull the string back to load the bolt. A totally ideal method in warfare … Devices were crafted to increase this already swift reload speed. A rack and pinion—a winch-type contraption—was one such device (image below). Another was a belt attachment which pulled the string back. Larger crossbows possessed another type of mechanism known as a windlass, seen in the picture below. 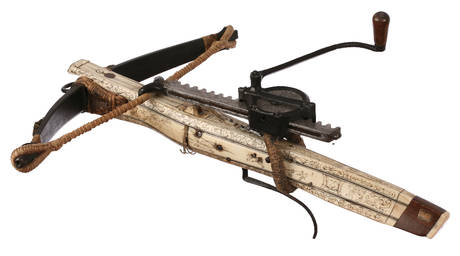 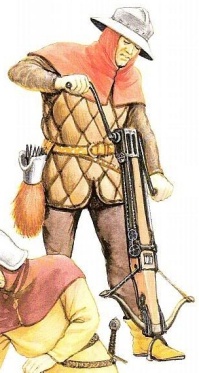 The crossbow was a weapon rarely used by the common folk. They were high-tech devices in their time, like the floppy disk in the nineties, and as a result, cost a pretty penny.

In warfare, crossbowmen hid behind a large shield known as a pavise. As you can see in the picture below, one man held up the shield, while the crossbowmen worked away behind. 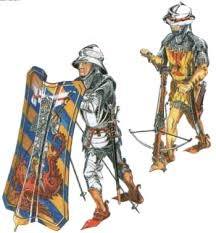 As well as shields, crossbowmen, and archers too, tended to be protected by pike or billmen who formed defensive positions around them, known as hedgehogs, a tactic used to counter cavalry attacks. 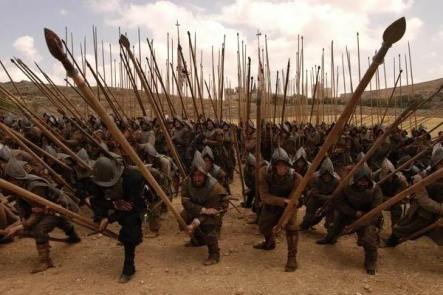 Try charging through that

If you want more crossbow fun, check out this website.

If you have any interesting bits of knowledge on archery or any great details to do with archery in fantasy, please share in the comments below!

Thank you for checking out this guide on medieval archery and archery in fantasy. Hopefully, you’ve learned some new insights and details to include in your own archery-based fantasy stories. Here are a few more relevant guides you may find of use for your fantasy tales:

A Fantasy Writer’s Guide to Castles and Keeps: Part 1

A Fantasy Writer’s Guide to Castles and Keeps: Part 2

A Fantasy Writer’s Guide to Castles and Keeps: Part 3

A Fantasy Writer’s Guide to Armour

A Guide to Writing Fight Scenes

If you love a good history book, then I recommend the following. Truly insightful.

By Sword and Fire, Sean McGlynn

If you’re a visual learner, then check out this documentary on medieval archery by the brilliant historian, Mike Loades.

Thank you again for reading this article on archery in fantasy. Happy shooting! 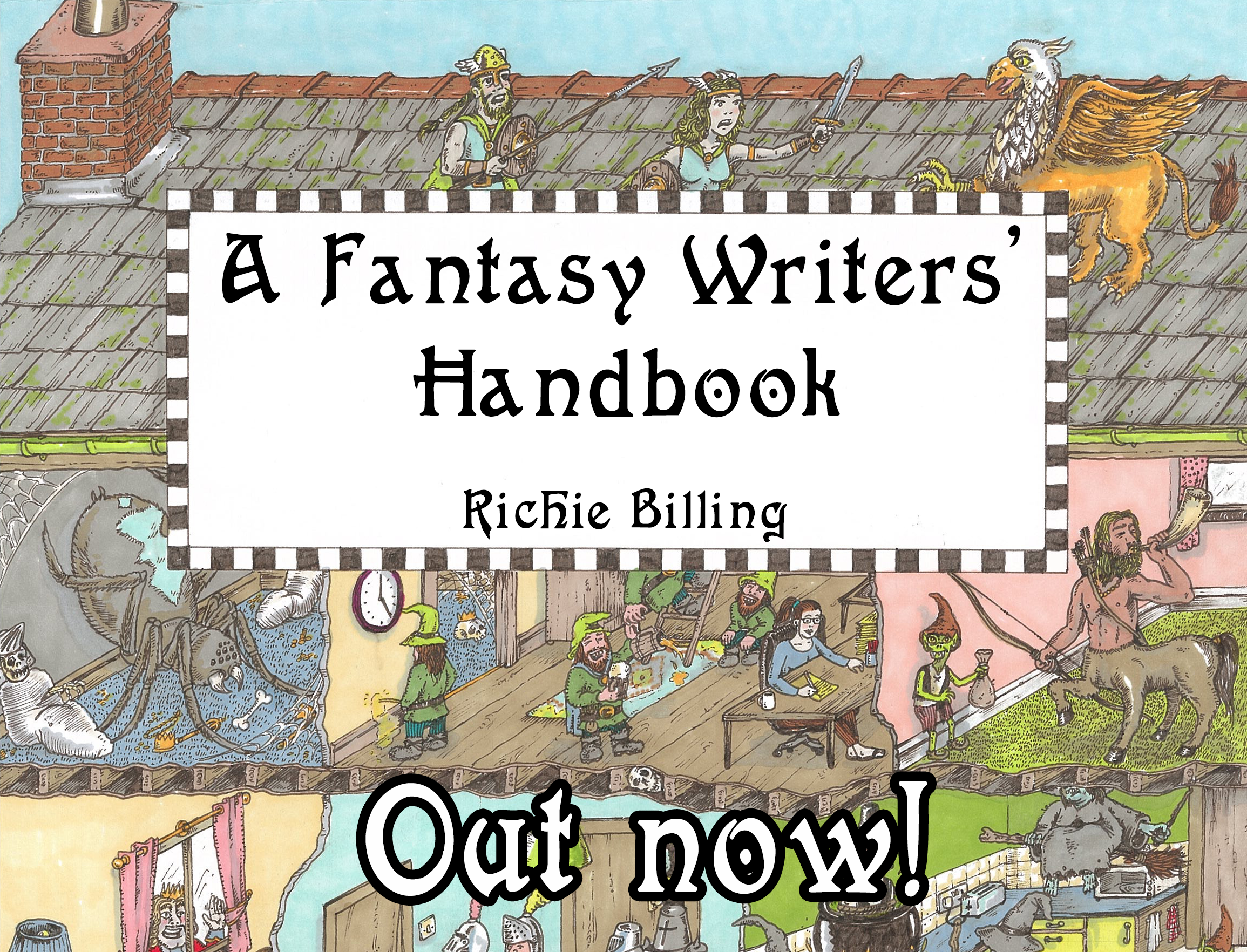 If you’re enjoying my little corner of the web, why not stay in touch? Everyone who joins my mailing list receives a bunch of tools for writers, including lists of publishers and book reviewers, the first chapter of my debut novel, Pariah’s Lament, and also a free 150-page eBook on the craft of writing. Simply fill out the form below! 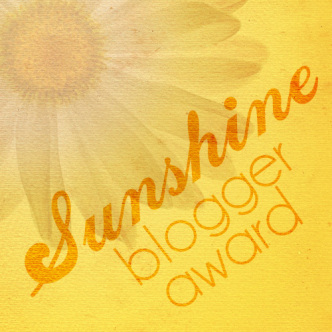